This year has seen the highest reported number of sexual offences in the North East since 2015, according to an FOI request sent to Northumbria Police.
A total of 4,766 alleged victims reported a case of a sexual offence in 2018-2019. This is a dramatic increase from 2015-16, when 2,832 incidents were reported. During this time, 624 arrests were related to sexual offences. Of these 624 arrests, 101 resulted in a charge or summons, while 284 cases were dropped as a result of “evidential difficulties”.
The Office of National Statistics recently released data showing that the North East has the second highest rate of sexual offences. In addition, the same data set revealed that the North East has the second highest level of severity of sexual offences in England and Wales, only narrowly overtaken by Yorkshire and the Humber.
In 2017, it was revealed by the Office for National Statistics that the North East had the highest number of reported sexual offences in the UK and Wales.
A spokesman for Northumbria Police said: “As a force we are committed to making sure everyone who reports a sexual offence receives the highest level of service. Our officers take every report extremely seriously. The fact we are seeing a rise in the number of such offences being reported to police represents an increase in confidence for victims to come forward, which should be seen as a positive.”
The Survivors Trust, a charity dedicated to offering support to victims of sexual offences, claims that 700,000 people aged 16-59 were victims of sexual assault across the country. However, it is claimed that only one out of five survivors will ever report that the alleged crime took place.
A spokesman for ARCH North East, Sexual Violence Support Service, said: “There are many reasons people report sexual offences.”
For anyone wanting to contact ARCH, call 01642 822331 or visit the website https://www.archnortheast.org. 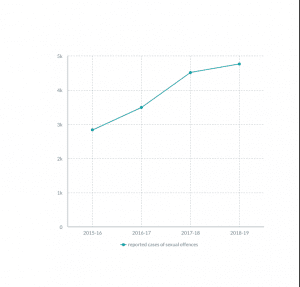