Deputy chairman of the European research group and Conservative candidate Mark Francois visited Sunderland recently to support Houghton and Sunderland South candidate Christopher Howarth. Francois said: “as a Eurosceptic I am proud to visit Sunderland as the city lead the way in the 2016 Brexit referendum, the Brexit result in Sunderland was Iconic!”

Nissan has recently voiced concerns about a no deal Brexit and has said recently in an article in the Independent that: “a no deal Brexit would make the entire European business model unsustainable.” Francois responded: “no deal probably isn’t going to happen; as the Prime Minister likes to say we’ve got a deal its oven baked and ready to go, so we will leave in an orderly fashion.”

As reported recently in the Evening Chronicle Houghton and Sunderland South MP Bridget Phillipson criticised the Prime Minister’s new Brexit deal, she said: “It’s a terrible deal, it’s even worse than Theresa May’s deal. Furthermore, this deal will damage the country in the long term.”

In response to the criticism of the Prime Minister’s new deal Francois responded: “Bridget Phillipson will not vote to leave the European Union under any circumstances her voting record implies this, she does not want us to leave.” 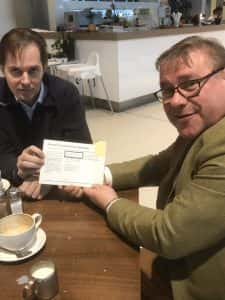 With regards to the deal itself Francois said: “The difference between Theresa May’s deal and Boris Johnson’s deal is that the backstop has now gone. This is why I and Christopher Howarth along with all Conservative candidates standing across the U.K. have pledged to vote for Boris Johnson’s deal if we win the election.”

This is the first General Election to be held in the month of December since 1923, December elections are a rarity for obvious reasons – it is very cold and it’s the festive season. When asked about why an election was needed in December, Francois argued: “The Prime Minister had to call a General Election to clear the log jam in parliament and to get a majority Conservative government elected that will take us out of the European Union; this is what the people voted for in the referendum.” Francois went on to say: “If people want to leave the European Union, you’ve got to vote Tory.”

Of the candidate Christopher Howarth who is standing for the Houghton and Sunderland South constituency, Francois said: “Christopher worked with me as my researcher in parliament on the Lisbon Treaty, and is someone who passionately believes that we should leave the European Union.” He added: “Christopher’s family hail from the North East and his grandfather used to run a glass factory in the city, he desperately wants to represent the people of Houghton and Sunderland South in parliament and honour the result of the 2016 referendum by taking this country out of the European Union.”