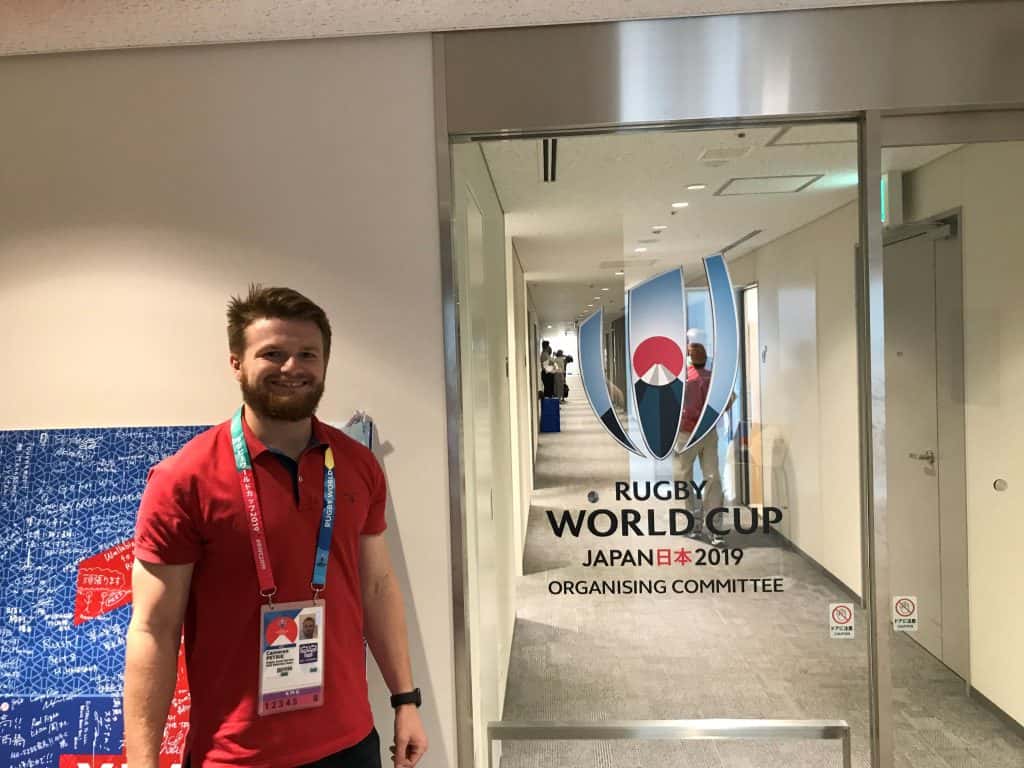 A University of Sunderland graduate has stepped out of the classroom and into the biggest sporting arena in the world – the Rugby World Cup in Japan.

As England prepare to take on Argentina in the Tokyo Stadium on Saturday October 12, Cameron Petrie plans to be at the centre of the action.

Cameron graduated from the University of Sunderland in 2019 with a degree in Broadcast Journalism, but years before he even came to university the keen rugby fan saw an opportunity to pursue his passion, and kick off his career in style.

“During the last World Cup final in 2015 I was in my last year of college,” says Cameron.

“My plan was always to work in sports media, and one of my dreams was work at a Rugby World Cup. To be in Japan at arguably the biggest event in the history of rugby is a dream come true.”

Now Cameron, 21, is spending six weeks with the Rugby World Cup Media team in Japan. It is a once in a lifetime opportunity which the young journalist has been working towards for years.

Now based in Tokyo, Cameron is supplying content in terms of analysis, data and research for the matches, as well as doing interviews with players, coaches and officials.

He says: “It’s amazing. I have been working very hard with long hours and not a lot of time off, but it’s funny how the hours fly when you enjoy your work.

“Tokyo is such a great place to work and live, it’s very safe and the people are so respectful and polite – plus it’s the cleanest place I’ve ever been.”

It was through his podcast that Cameron met and interviewed Simon Gleave, Head of Analysis for Gracenote Sports. Simon was putting together a team to produce statistics on every team and player for the Rugby World Cup intranet, content for the tournament’s media and website, and for their social media, producing analysis of the teams and play.

“He asked if I wanted to be part of it – and I said course I did. It was beyond anything I could have asked for.”

But the cost of living and working in Japan for over two months as an intern almost put pay to his plans – until he approached the University of Sunderland’s Development Office.

“The company covered flights and accommodation, but I needed money to eat, drink and live. I’m spending two months in Tokyo, and while it isn’t horrendously expensive, it isn’t cheap either.

So funding from the University’s Development Office has been a huge help.”

Cameron is tipping the New Zealand All Blacks to win, who he calls “the most complete side”, but outside his impartial role at pitch side, Cameron is hoping for a different outcome.

“I was born in London, and lived there until I was eleven, so I’ll be supporting England to win,” says Cameron. “Which sounds a bit odd when your mum’s Welsh and your dad’s Scottish!”
England play Argentina at 9am on Saturday 5 October, with coverage on ITV1 from 8.10am.

For more information about studying journalism at the University of Sunderland visit https://www.sunderland.ac.uk/study/journalism-and-pr/undergraduate-journalism/