The local elections will take place across Sunderland on May 2, 2019, with 26 councillor positions available across the 25 council wards.

Labour, the Conservatives and UKIP have each put forward 26 candidates for the positions; meanwhile, the Green Party have a total of 24 candidates, while the Liberal Democrats have 20. 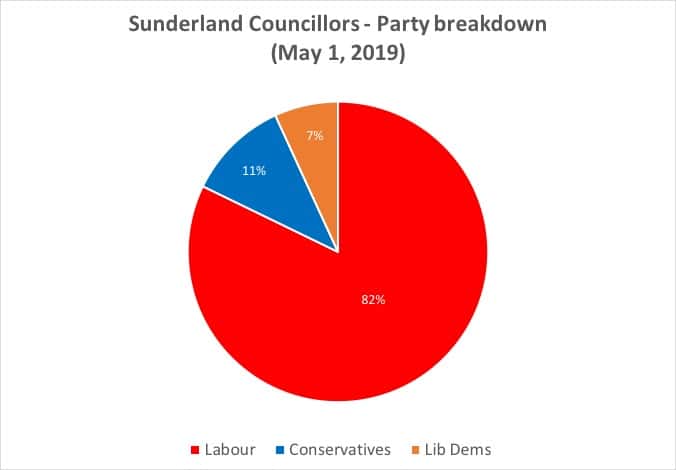 After the 2019 elections, the council will have its full complement of 75 councillors, with each of the 25 wards represented by three councillors.  Two seats, at the Sandhill and Washington South wards, are currently vacant.

Of the 24 occupied seats up for election in 2019, 21 currently belong to Labour, two belong to the Liberal Democrats and one belongs to the Conservatives.  However, seven serving Labour councillors will not be standing for re-election in their current wards,  including Lynda Scanlan, the mayor of Sunderland, who will be contesting Hendon, rather than Millfield, this time around.

Elsewhere, the Conservatives will be looking for Peter Wood to retain his place in St Michael’s ward, which currently has a full complement of Conservative councillors.  The party will also be hoping James Doyle, their candidate for Fulwell, can defeat current Labour incumbent Margaret Beck.  If this happens, they will gain full control of a second council ward.

Similarly, the Liberal Democrats will be hoping for a strong performance in Millfield, where they also have the chance to take full control of the ward, should their candidate, Julia Potts, take the position being vacated by the mayor.  They will also be looking for Martin Haswell and Stephen O’Brien to hold Millfield and Sandhill, respectively.

Sunderland Council was created via the Local Government Act of 1972. The first local elections followed in 1973 and local government in Sunderland has been controlled by Labour ever since.  It remains to be seen whether the Conservatives, the Liberal Democrats or UKIP will make any significant inroads this time around.