More than 400 people were treated for intentional self-harm injuries for the period of 2017-18 according to data gathered by Public Health England.

The numbers released show self-harm remains one of the main causes of medical admissions in the UK, although the number of cases in Sunderland have declined.

Though cases of self-inflicted injuries in the region have reduced slightly (from 431 in 2016-17 to 426 last year), Sunderland Council’s cabinet member for health and social care, councillor Geoffrey Walker, feels it remains a pressing concern.  He said:

“While it is good news that the rate of hospital admissions due to self-harm in Sunderland have been lower than the rest of the North East and England for several years, any admission is troubling and of concern.

“A range of mental health services are provided locally and people of all ages are affected by self-harm.

“But we recognise the particular impact on young people and, in addition to mental health services, there is also an increasing focus on prevention.” 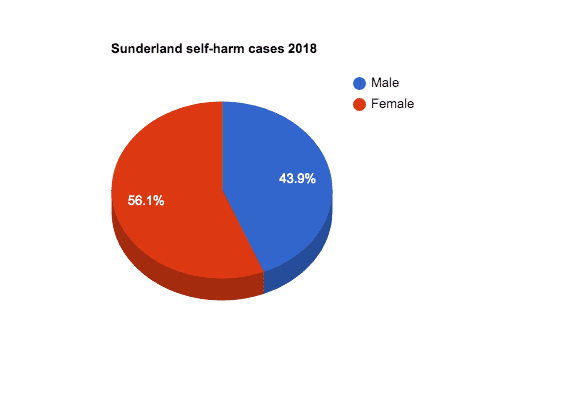 Female cases of self-harm were higher than those in males, with 56 percent of the total cases reported by women and young girls.

In response to growing concerns of self-harm, social media sites such as Instagram have announced prohibition on publication of self-harm images on its platform in an effort to clamp down on the sharing.

Cllr Walker also stressed the importance of opening up about issues plaguing young people.  He said: “Working with young people, Washington Mind have recently developed the app Reasons2 to help improve mental health among young people. I would urge people to always speak and share any issues they are having.”

“Help can be given. I attended the East Voluntary and Community Sector meeting where the team at Sunderland Mind talked about the programmes they have in place to help provide support specifically aimed at young people with an ambassador programme for schools which had very positive feedback – I’d recommend following that up.”