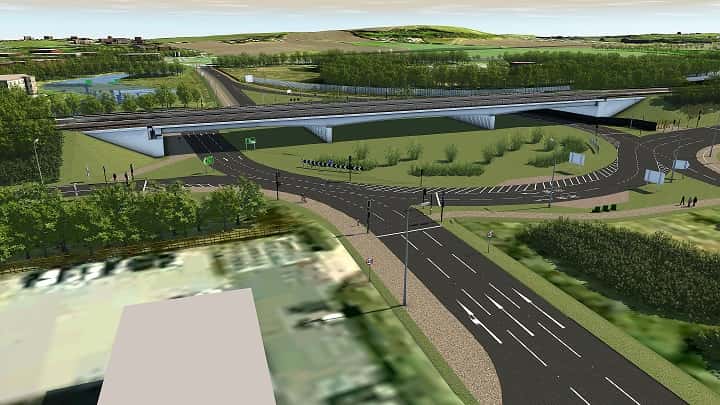 A £125 million scheme to improve congestion and reduce journey times for drivers on the A19 in South Tyneside is underway.

Due to the development of a £41m International Advanced Manufacturing Park (IAMP) in East Boldon, which is set to create thousands of jobs, an increase in traffic is expected on Testos roundabout on the A19.

Testos is already known for rush hour congestion, partly due to its proximity to the Nissan plant at Sunderland.  The new road will save a total average of two hours for every driver each year.

“Testos roundabout and Downhill Lane regularly suffer from congestion, particularly at rush hour, so these major improvements are vital. We can take great pride from the fact that this major work will benefit the region.

“It means the junctions will be able to cope with the extra volume of vehicles, and in the process, we can help the local economy by improving access to the International Advanced Manufacturing Park and Nissan plant.”

The scheme’s final outlook will see the A19 raised above Testos roundabout, and new slip roads to be built between the A184, Downhill Lane and the roundabout.  This is part of the government’s £13 billion investment to make journeys across the north easier, safer and quicker.

The changes mean the A19 will be uninterrupted, as the junction will be removed with simple slip roads allowing a smoother pass by for long distance drivers.  New cycle lanes and pedestrian walkways will also be put in place.

“This scheme is crucial to the success of the International Advanced Manufacturing Park. With the park expected to create more than 7,000 jobs over the next decade it is vital that we have the right transport infrastructure in place to support it.

“The A19 is one of the region’s key assets and these improvements will not only increase capacity, reduce journey times and reduce congestion, but promote economic growth and maximise employment and investment opportunities.”

The two-and-a-half year project will, where possible, leave two lanes open during weekdays and one lane open overnight. As the existing Testos roundabout serving the A19 and A184 is already a busy and congested area in Sunderland, even more so at peak rush hour times, disruptions to journeys are likely.