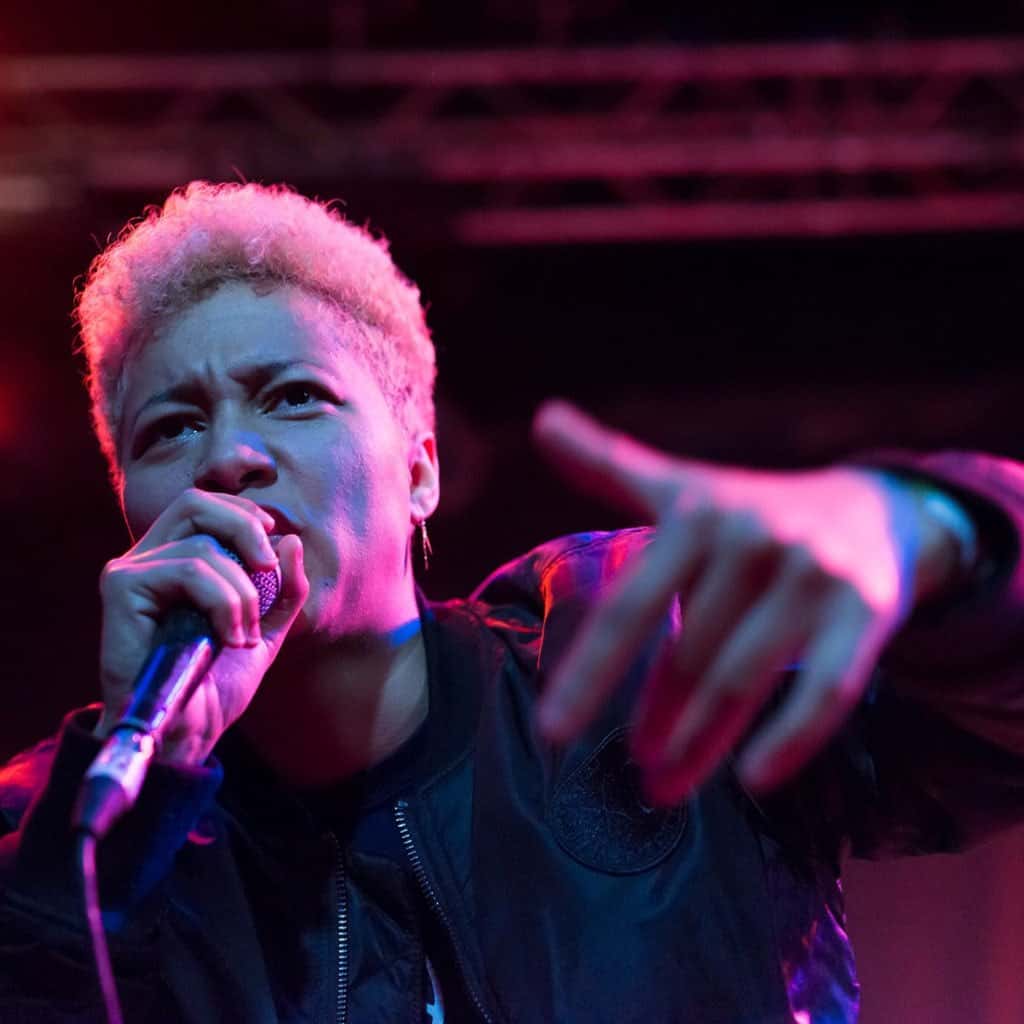 After a three-year hiatus from releasing music, Newcastle rap artist Kay Greyson is determined to make 2019 her own.

So far this year, Greyson has been the subject of a recent feature on BBC’s prime-time show Inside Out, released a new single (Give It All – out March 11) and delivered a half-time performance at Newcastle Eagles’ new stadium, the Eagles Community Arena.  It would be enough to tire anyone out by March but the artist is taking it all in her stride.

“I’m really hyped to be releasing a single because I haven’t really released any proper music since I put out my mixtape three years ago,” said Greyson. “I’ve had odd videos out here and there, but this is my first proper release in a while so I’m really excited.”

In her music, Greyson pulls a wide range of influences together, from her favourite artists to the area where she grew up, her experiences from childhood and the way she sees the world today.

“When I started rapping, I wanted to be like the rappers I was watching,” she said. “I was super into 50 Cent, Eminem… but I’m from England, I’m a totally different kind of person.

“But I wanted to be like them, so I started rapping in that style and it grew from there. Obviously as I got older, you have to be yourself and tell your own story, and that’s what I started doing, but still with that same style that I’d attached to in childhood.

“That’s what inspires me, wanting to be like my heroes.”

Greyson draws inspiration from the streets she grew up on in the west end of Newcastle. Being able to devote her spare time to rapping and making music kept the artist away from being part of the youth crime statistics perpetually plaguing the news – and she hopes her work will be able to inspire the same for others.

“I’m not from an area where people have a lot of things, everyone has struggled in their own ways,” she said. “That inspired me in a way. I wanted to go and get something for myself, make something of myself and make a good life because there’s a lot of people who I grew up with who haven’t done that.

“It motivates me to keep going because a lot of people in my area didn’t have that chance.”

Her drive and commitment eventually led to the work she does now in her day-to-day job. When Greyson isn’t recording music, she’s devoted to youth work in her local community.

Initially volunteering for a music charity, she soon took on paid work to help local children express their creativity:

“I’d been going to the same charity recording studio [Chat Trust] since I was 11 years old, just to record my music,” Greyson recounted. “I was going for about five or six years, and then the charity asked if I wanted to do any volunteering and help the kids out.

“They didn’t have a lot funding or staff, so when the kids were coming in everyday and wanting to record, they didn’t have people who could sit in and record with them, so I was asked if I could help out and volunteer. I said yes and did that, and a company called GemArts, who employ people to do that exact same thing, found out about that and offered me a job. It was a nice natural progression.”

Using her writing talents, Greyson now works with Excelsior Academy in Newcastle to help pupils benefit from their own creativity, but admits it’s ‘a lot different’ to her roots working with charities.

“We go in, take over their English class and go into actual classroom settings where it’s not an optional thing, it’s a lesson. But it’s good because it shows that rap and songwriting can be a serious part of learning; creativity is still a part of learning.

A spokesperson from Excelsior Academy said: “Kay supports students to express themselves, use their voices and share their experiences by providing a safe and creative space to explore writing.

“Kay has been working with students from Excelsior Academy through New Writing North’s Young Writers’ City project. Kay works with pupils through classroom and extra curricular sessions, and gives young people the opportunity to explore how they can use rap and spoken-word to talk about their experiences and identity.

“As a female rapper, Kay challenges stereotypes prevalent in rap/hip-hop and shows young people, particularly young girls, what they are capable of as artists.

“Through taking part in Kay’s Young Writers’ City sessions, students have worked individually or in small-groups, gaining the confidence and skills to perform their work back to their peers. We know from talking to students that this confidence helps them in other areas of their school and personal life, and has a positive effect on both wellbeing and attainment.”

Greyson added: “I know that music is being taken out of schools because it’s seen as an extracurricular thing, so this project is sort of putting it back and saying, ‘no, being creative is a viable career path’.”

But even with the work in schools, Greyson still believes more needs to be done to help young people.

“It needs to be outside of school as well. We don’t get a lot of time with the kids in school, we get about an hour, and we work with about 60 kids in a day. We can’t give that individual one-to-one help with each of them.

“And I believe the schoolwork can still stand alone, and if they continue with that it can help in exactly the same way (as extracurricular work). Kids who have worked with us will find a way to pursue it for themselves… but that avenue needs to be open for it to be easy for them.

“In reality, there’s no option. When you don’t have the money to go into town and do other stuff, you will stand around and find something to do.

“It’s not fair to take these kinds of charities out of the areas and blame the kids.”

Her appearance on BBC’s Inside Out highlighted Greyson’s music talents as well as her passion for keeping young people on the right path, and the talented rapper was pleasantly surprised by the response.

“I didn’t expect this many people to see it, but the reaction has been amazing. The time it was on was perfect, everybody had a chance to sit down and watch it, and it being on the iPlayer was fantastic.

“A lot of people didn’t know that I did that kind of work, so it’s nice to get the recognition for it as well.”

With her new single, Give It All, out today, Greyson is looking forward to keeping the momentum going for the rest of the year:

“Once the single releases, I’ve got a show at the Think Tank in Newcastle on Friday, April 5 supporting Dylan Cartlidge, so that’s going to be a really good gig where I’ll be performing a lot of the new music.

“After that, looking at releasing an EP-type album for the summer just to keep the momentum going, and hopefully after that, touring and doing shows.”

“For a while, I’ve been making music with different producers, but mostly I’ve been doing my work in the schools and getting that off the ground. But now I’m ready to be getting back to what I do best.”

You can see more of Kay Greyson’s work on BBC’s Inside Out North East and Cumbria via iPlayer.

Her new single, Give It All, is available to stream from 5pm via Spotify and Apple Music.