While November commemorates domestic violence awareness month, SR News discovers that women living in the North East of England are almost twice as likely to suffer domestic abuse than women living in London.

Women’s Aid, a grassroots charitable federation, works towards building a future where domestic violence is not tolerated. The charity defines domestic abuse as, “an incident or pattern of incidents of controlling, coercive, threatening, degrading and violent behaviour, including sexual violence.” 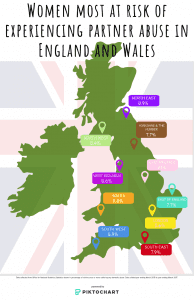 Figures collated and released by Office for National Statistics presented women most at risk of experiencing partner abuse in England and Wales from the year ending March 2015 to year ending March 2017. The dataset shows women from the North East of England were at the highest risk, at 8.9%, whereas females from London were lowest, at 5.6%.

“We receive calls every single day in relation to domestic abuse,” said Detective Chief Inspector, Louise Cass Williams, from Northumbria Police’s Safeguarding department. “Safeguarding vulnerable members of the communities we serve is our top priority and this includes victims of domestic abuse.”

Despite there being a wealth of domestic abuse support groups and charities available to all sufferers and survivors of domestic abuse, Women’s Aid aims to solely protect the women who are victims in these situations.

The Chief Executive of Women’s Aid, Katie Ghose, SAID: “No survivor should face domestic abuse alone. Despite more victims than ever reporting domestic abuse to the police, the number of offenders being successfully charged, prosecuted and convicted has fallen.” 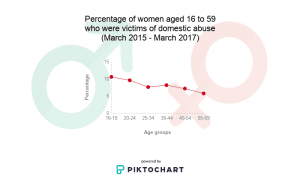 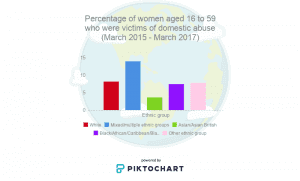 November saw domestic abuse survivors celebrate #domesticviolenceawarenessmonth online, as well as International Day for the Elimination of Violence against Women, on Sunday, November 25.

Women’s Aid took this movement as a chance to push ‘A Bill for Survivors’ legislation toward the government’s domestic abuse bill. The charity claim this bill is, “highlighting the importance of delivering sustainable funding for domestic abuse services with national oversight so that every survivor can access the support she needs.”

Chelsea Davis, a member of cabin crew from Sheffield, was 19 years old when she began to suffer domestic abuse over a period of nine months. Describing the authorities who dealt with her case as, “being a light in the darkness,” Chelsea believes education is key when dealing with domestic abuse. “I had no idea what my options were, who to contact, how to get help and how to get out.”

Northumbria Police and Crime Commissioner, Dame Vera Baird QC, is dedicated to tackling domestic abuse and regularly talks on a national stage about tackling such despicable offences. Detective Chief Inspector Louise Cass Williams, said: “We are aware it can take great courage for victims to come forward and we have worked very hard to raise awareness of domestic abuse in all its forms.”

“My heart really does go out to those who don’t have a support network and are isolated in domestic abuse,” says Chelsea. However, she praises Women’s Aid for their work. “Women’s Aid are a great starting point as they work nationally and put you in touch with the right services locally.” Their anonymity on phone statements was also something Chelsea found invaluable and verified their professional level of confidentiality.

During a 2017 annual survey conducted by the charity they found the particular age range of 16 to 24-year-old women are less likely to access support services. Their research also found one third of young women had been in an abusive relationship, while over two thirds of young women, who said they hadn’t experienced domestic abuse, had experienced one or more ‘red flag’ behaviours of abuse.

Having experienced domestic abuse first hand, Chelsea believes teenagers should be educated about the right and wrongs of relationships, and not just the biology of sex. Chelsea says, “I now have an incredible life that I am thankful for every single day because I’m one of the lucky ones who survived.”

Northumbria Police’s Safeguarding department states: “Our message is clear: If you are a victim of domestic abuse then please don’t suffer in silence.”

Women’s Aid offer their support if you are worried about your relationship or that of a friend or family member to contact their Freephone 24-hour helpline on 0808 2000 247 or visit www.womensaid.org.uk