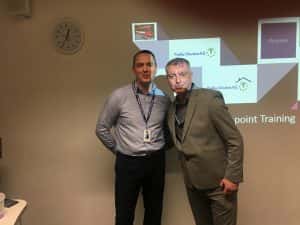 An ex-offender and a former prison officer have teamed up to help prisoners in Durham.

Gary Crooks and Ross Oakes had two very different childhoods. Gary’s was an early life of crime that led to Durham prison by the time he was 15. Ross became a supermarket manager and then went on to become a prisoner officer.

The two did cross paths earlier in life. Ross recounts that as a manager of a supermarket, “somebody took the bricks out of the wall and stole all my cigarettes and spirits.”

Gary said: “Yeah, that was actually me. He’s never forgiven me for it.”

Gary and Ross now run First Point training together and work to improve the lives of offenders. One of their projects is to get inmates to be work-ready once they leave the prison system.  Recently, they featured on the channel 4 documentary focusing on HMP Durham.

On February 6, 2019, they spoke to students at the University of Sunderland about First Point training and how childhood issues impact on offenders and lead them to crime.

When asked about the channel 4 documentary, the two said that the issue is the audience only saw “a snippet” of the work that goes in to helping prisoners.

Catherine Harrison, a Childhood Studies student, said: “I think they do an absolutely fantastic job.”

Other students mentioned that they thought the workshop gave them a better insight into the impact of childhood on later life.

Stephanie Hunter, a senior lecturer, said: “They do such important work and I’m fortunate the university has such good partnerships. Hopefully it helps students with their employability.”