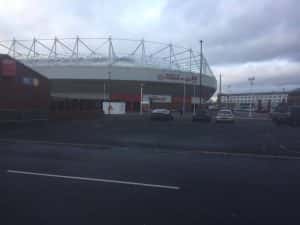 Chris Coleman has been sacked by Sunderland AFC.

The former Wales international manager only took over in November but won’t finish the season with the Wearside club already confirmed to be playing league one football next season.

Sunderland revealed the news in a short statement on the club’s official website:

“Sunderland AFC announces that manager Chris Coleman and his assistant Kit Symons have been released from their contracts.”

“The club would like to place on record its sincere thanks to Chris and Kit for their tireless efforts in what has been a hugely disappointing season for everyone involved with the club.”

The Welshman won just five games out of 29 in charge of the club during their spell in the second tier , leaving with a win percentage of 17.2%.

Robbie Stockdale will take charge of the team against 1st place Wolves next Sunday.

Charlotte Coleman, wife of the former Sunderland manager claimed to be “gutted to be leaving Sunderland” on Twitter.

Sunderland are already confirmed to be finishing bottom of the championship this season but with a potential new ownership at the helm the black cats will be hoping to have a new manager in place soon to lead next season’s promotion charge.