A community dance group are raising funds to send their young dancers to an international competition.

Lambton StreetZ hope to compete at the World Championships held in Glasgow this year.

Founder of Lambton StreetZ, Marie Mould said: “We are hoping to raise around £6,000 to go to the SECC in Glasgow, where the competition will take place for four days, starting on August 23.

“We’ve had a fundraising night, where the children have danced and we have put together various other things, such as raffles and tombolas. The children are also going to be taking part in bag-packing and have recently done a litter pick where the council have made a donation for the young people’s time.” 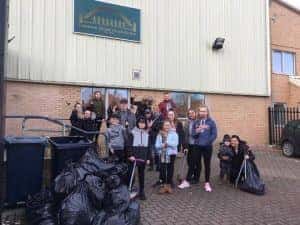 Lambton Streetz is a project originally formed as a street cheerleading group in 2009 at Pallion Action Group, before moving to Lambton Street Youth Centre as a young person’s street project  in 2015 – where they recently had their studio refurbished. The move has helped the group interact with more young people, by getting extra children involved. Their youngest dancer, currently, is four years old, while their eldest is 23.

Euan Lowther, the five times North East champion and a teacher at Lambton StreetZ, said: “I have been dancing since I was seven years old and joined Lambton StreetZ when I was just ten. I have been dancing with them for almost seven years now and have taken part in many competitions and have competed in various places, including Scotland and Kent.”

The young people decide themselves which competitions they want to enter, what costumes they wear and certain routines they wish to perform. Speaking about the fundraising, Marie told SR News she thinks “it’s good for the young people as well, as they are not just being given money by their parents, they are getting a work ethic out of it too. They know that if they want to do something bad enough, they have to work for it.”

Classes for four to ten year old’s are held on a Thursday at 16.30. For dancers aged ten and over, classes also take place on Thursday at 17.30.

For anyone wishing to contribute to the fundraising, message their Facebook page at: https://www.facebook.com/Lambtonstreetz/