Hundreds gathered at the Haven Point clock tower in South Shields, on Saturday October 14, in protest of plans to downgrade acute services at South Tyneside Hospital.
The campaign to save South Tyneside Hospital follows NHS England plans to reduce over ten A&E services in the North East to four or five. The march and rally was just one of many events in protest of the NHS cuts to South Tyneside Hospital, including the closure/downgrading of acute services such as children’s A&E, consultant led maternity services, stroke services and the special baby care unit.
Roger Nettleship, chair of the campaign, said: “We’re marching today because we want to save these services because thousands use them. We’ve got to keep building these movements of the people and trade unions together and work to save our right to health care.”
Maddie Nettleship, Mr Nettleship’s wife, added: “It’s more than inconvenient, it’s a disaster.” She stated: “South Tyneside has the second lowest car usage in the country, people haven’t got transport to get to Sunderland, we know it costs at least £20 each way for a taxi.”
For many, the services offered at South Tyneside Hospital are essential and have had a huge impact on lives of those. Local people would be forced to travel further afield to the likes of Sunderland Royal Hospital or Newcastle Freeman Hospital to acquire the services they need.
Hayley Farquharson expressed exactly how the hospital has helped her two young children in the past. She said: “Mary had cancer when she was two and they were the first point of contact. Russel, my little boy, he didn’t feed properly and was having hypoglycaemic attacks and we arrived at eleven o’clock at night and if we hadn’t he would be dead.” 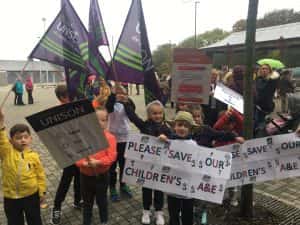 Employees of the hospital were also amongst the hundreds of people that gathered in South Shields for the march and rally, expressing their concern about the plans to slash the services offered at South Tyneside Hospital.
Julie, an employee at South Tyneside Hospital, said: “It’s actually life threatening for some people,”. She also expressed her concern as a mother, stating: “I have a daughter who has severe asthma, she needs a hospital on the doorstep so her opinion is ‘if this hospital closes, mam I want to leave South Tyneside’.”

Emma, another employee, added: “In times of austerity, people are really struggling financially and can’t afford the costs to get to other places.”

The petition, created alongside the campaign in hope of saving the acute services at risk, is almost at 30,000 signatures; this is set at the current goal of signatures to collect.

In their media release, North of England Commissioning Support said: “We’ve been very clear throughout the consultation process that any change would only be done in order to improve the quality of patient care, ensure the future sustainability of services and make the best use of the staff expertise and facilities he NHS has.”

They added: “We have been very clear that no change is not an option as these are vulnerable NHS services. If we do not change in a planned way then we will have to make changes in an emergency situation, and that is not good for patients or for staff.”