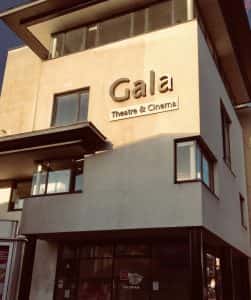 Q: Did you ever visit Durham before the book festival?

T: I think of it with affection just because so many of my friends went to University here, and their hearts wobble every time they mention it.

I have seen it in passing a lot, and I have come here just occasionally to do one or two-day filming. But I would like to spend longer here this time.

What happens is I get here at 4 o´clock and I am on the 9 o´clock train next morning. That is my life set. I should slow down a little bit more

Q: How did your life change since Blackadder?

T: Oh, completely changed. I was 38 by the time I did the first Blackadder series, and I was actually 40 by the time it became a huge success.

If you can imagine throughout my life up to that time I had done an enormous number of different things within the entertainment industry, film, TV.

I directed a lot, I wrote and performed in a whole variety of media. But only on a small scale.

Suddenly when I was in a big hit, and I was associated with really clever people, all the office doors were open to me, that had never been open to me before.

People found to their surprise that I could do things they had no idea I could do.  Well of course because I was, you know, middle age by that time.

I had the reward which I think a whole lot of actors don´t of actually being able to capitalize on the experience of all those years.

Q: How did you keep a straight face in Blackadder?

T: If you could imagine, in one rehearsal room for a week would be a lot.

A dozen paranoid perfectionists, all of who were a bit neurotic one way or another which was why they were comedians, they were without exception kind and very socialized people but passionate about doing the work right.

We would walk around a room, passing, looking at the script, trying to workout where the floor was, how we could compress it, how could we make the gags look better and how the characters and the narrative work better.

As soon as we sold that, let´s say half a page of the text, we wouldn´t fall around laughing. We would just say YES and we would move on to the next thing.

We had done that so many times, that kind of text analysis. By the end of the week we would be pretty fed up and actually all the laughter had gone out of it.

We worked on comic strategies, if you can see what I mean. When we started to perform it in front of an audience on that Saturday night, we were always intensely surprised and incredibly relived when the laughs came. Rather than laughing at what we were doing or what our fellow actors were doing, it was a kind of curiosity about all that work we put into to it.

But that paid off, that bit we were always slightly worried about it but let it go, Dammit why did we let it go? Those kind of emotions and because I have spoken to lots of the others about that, even now when we watch it we slightly grumpy faces. Like: “oh why didn´t we get it right? Rather than nearly by”.

Q: In which area of work would you say your passion lie?

T: My passion lies in stuff. I am just interested in stuff and how I engage with that stuff, how I represent that stuff.

When you do it in the most appropriate manner, it may be as song in a musical, a part of novel or an autobiography, documentary or whatever it is appropriate, that is what you try to make.

People ask:”what is your favourite series?” It just didn´t work like that. It is being always to me about process. What is my favourite performance publicizing my book No cunning plan? The answer would be this one, the one I am about to do.

Q: Do you always leave a little piece of you in everything you do?

T: Yeah, but on the other hand you might say “That is why he is so small!”

But on the other side I think you always take a rather big piece, which is why probably I am not as a instinctive of a performer as I was when I was much younger. I certainly always carry the experience of thousand gigs.

Q: What would be your advice to writers?

T: I suppose the response is in that last answer.

Do it. And then do it again. And then do it again. I have learned that drafting is all. I don´t see how you can get writer´s block if you are constantly drafting. It doesn´t matter, some put some old thing on the page. You know you are going to redraft it. Is not by writing this thing on some way you forced yourself it is just what you decided to do. I had three writing experiences, three projects that I have being doing since Summer.

One I have to one side, other I chapped away and one just sailed through and it was commission after I had done about 10 days of it. I am not sure that is the grand scheme of things one was that much better than the other, the sum total of all that experience got me to where I am. I have been reading quite a few books about tutors recently, but not queens and kings, but things like secret services and the actual Knife of Marlowe of Shakespeare and two things struck me about it.

One was that was no sense in being an author, you were just one of the company and your job was writing and somebody else came in and take a round on a couple of paragraphs and no one got upset about it, it was just part of the thing. So, the idea of Shakespeare wrote some of them it doesn´t actually make any sense, that is not how it where wrote.

The other thing that was interesting and I thought was that was probably around 100 Shakespeare scripts, and we just have 30 or 35. There no guarantee that the ones you have are the best, they just use to write like old billiard and I think that notion of writing as work is very interesting.

When you are 13 your idea of writing as work means writing as suffering, I don´t think that at all. Writing as the thing you dedicate yourself to is to get better all the time so that you can be in your heart you can be a writer, the working towards that is a wonderful thing.

Q: What was it like working in Time Team?

T: In many ways that was a writing job because essentially what would get to do would be to out to a trench and look the issues involved in that trench in the moment, discuss with the archaeologist how to dig and how it got to this now, the route and where they wanted to go, discuss with them how we would unveil that narrative in an improvise way, then discuss with the director how we would choreograph that.

I loved it and it improved my ability to write enormously because archaeologists are so forensic and it would be: ‘Boom, that is the thing, that is important, and that is the story’.

Most writers aren´t forced in to do that quickly and spent days looking out the window and showing their pencils to get to that position, I was lucky enough to be trained.

Q: What did you find different when writing about yourself?

T: I think the trick is to be distanced enough from yourself to be able to write objectively but close enough to be able to incorporate the emotions and the intense of the experiences.

When I was writing about the first 25 years of my life there was such a time difference between now and then and also, I was young and an idiot, that it was possible to look back with an enormous amount of affection, and all the mess that I made in my love life, in my work life and with my relationship with my parents. It just seemed…how daft they were or embarrassing or exposing they were…I just seem kind of fun.