13 hours ago
Police appeal for witnesses after teen girl badly hurt in supermarket car park
15 hours ago
Max in a million: one little boy’s fight against a rare condition
16 hours ago
We love the NHS – but there’s a new ‘elf service’ in town for Christmas!
17 hours ago
Nissan denies Washington factory post-Brexit closure claims
2 days ago
Covid: deaths top 71,000, most schools report outbreaks, ministers plan Xmas

A North Tyneside choir are set to raise funds for a lasting memorial to fishermen who lost their lives at sea.

Backworth Male Voice will perform in April at North Shields to support the installation of the ‘Fiddler’s Green Sculpture.’

The sculpture will be dedicated to the fishermen that left the port of North Shields and lost their lives whilst doing their job. 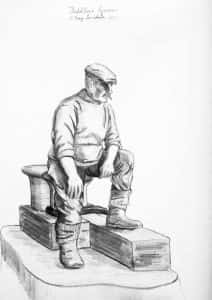 Brian Kerr, a member of Backworth Male Voice Choir, said: “Our main priority is to raise as much money as we possibly can for the fishermen’s memorial so, all of the proceeds from the event’s ticket sales will go towards the heritage project.

“We felt it was important to support the NSFHP because it’s one of the few fishing ports that doesn’t have a memorial for the fishermen that have been lost at sea and we know that there have been quite a lot lost from North Shields.

“On the night, we want people to just sit back and be entertained. We are excited to also be joined by the Radcliffe Ladies Choir from Nottingham, who will be singing a mixture of modern, traditional and Geordie music, including Water of Tyne.

“I think the noise that 60 men and 40 women make collectively will be well worth hearing and something to experience.”

First launched in July 2016, the NSFHP planned to raise £75,000 to create a fitting memorial and a place of reflection on the North Shields Fish Quay.

Now, following persistent fundraising and the support of the local community, businesses and North Tyneside Council, the project has just £8,000 to go to reach its initial target.

Alison Spedding, a member of the NSFHP, said: “We were delighted that the Backworth Male Voice Choir wanted to help us and organise this event – it was literally ‘music to our ears’.

“The church holds 200 people and we are determined to get a full house, so at £7 a ticket that should get us £1,400 which will make a massive dent in the remaining amount that we need.

“Everybody really wants this memorial to happen and we are confident that it will be in place by September 2017.”

The event will take place on April 29, at St Hilda’s Church, North Shields.

For more information and to purchase tickets visit http://www.nsfhp.org.uk/event/backworth-male-voice-choir/