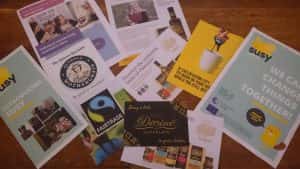 Northumbria University and Cooperative College collaborated to empower local people in Newcastle with the stories of Fairtrade journeys of women from India and Palestine.

The event took place during Fairtrade fortnight from the February 27 -March 12 and aimed to revitalise the interest in Fairtrade. Local businesses, schools, universities and members of the public were invited along to a public meeting, celebrating Fairtrade and the work of cooperatives around the world.

Speakers at the event included Veena Nabar, from India, who told the story of the Indian cooperative movement and how as a village they worked together to farm on the land, and produce products that would be traded fairly.

She said: “Everyone in the village is like one big family.”

Money for trade at a fair price is used for scholarships, building hospitals and education in India. Products that are fairly traded give producers a fair price for their goods and can often lift people out of poverty, bringing communities together in pursuit of a common goal.

The audience then learned of the Fairtrade journey of local women in Palestine, and the partnership between the social enterprise Zaytoun and farmers. Zaytoun aims to create a UK market for fairly traded Palestinian produce.

The attendees, who appeared to be captivated by their stories, were encouraged to support Fairtrade either through their businesses, by getting involved in Newcastle Fairtrade Partnership or by buying Fairtrade products. There was also the opportunity to sample fairly traded produce.

Manal Ramadan added: “Fairtrade has achieved a lot, it has brought communities together.”