The North East has become a hotbed for music festivals in 2017. Hit The North in Newcastle and Festival On The Wall in Northumberland are amongst recent additions to the festival calendar alongside regular events such as Evolution Emerging and Sunniside Live. One more festival has been announced for fans of UK Hip Hop.

The Bridge is taking place on the 6th May 2017 at The Sage in Gateshead. Tickets cost £14.20 and will include a CD with some of the performers involved with the festival. The full line-up boasts some big names within UK Hip Hop including Blade, Paigey Cakey and Genesis Elijah. There’s also a number of local names involved including North East legend Rick Fury, Sunderland up-and-comers New North East and Kema Kay following his role in the award winning I Daniel Blake. 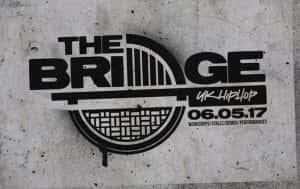 Sandy Duff is one of the organisers of The Bridge says “the idea came about in 2015 from conversations between myself, Ken Masters, John Dyer and King Fred. We all loved hip hop and had all been involved in working with young people as Grime broke and were impressed to see how strong that scene was and felt there was a lot of benefit to the UK Hip Hop scene as a whole in bringing the old skool and new skool together for a big event so we could educate both sides.”

Sandy feels The Bridge could help “Teach the youth about the history of hip hop in the UK, musically, socially and politically… and at the same time educate the older heads and give them a taste of the new style.”

Whilst there’s certainly a lot of talent within the North East, it’s not quite as notorious for its music as Manchester or Leeds. On the decision to host the event in Newcastle, Sandy says “Well the honest answer is becuase we all live here and wanted to do something to help the region and its scene. Plus we have the Sage Gateshead building which is ideal for presenting larger scale musical events with their full support, resources and funding. Newcastle has always had an amazing and often groundbreaking music scene but has often ended up in the shadow of other larger northern cities like Manchester, Liverpool and Leeds.”

Sandy doesn’t think that the spike in festivals in the North East is an “exclusive phenomena” as he notes “there’s been a boom in festivals across the whole of the UK.” He does however think “Its certainly good to see the North East stepping up its game and pushing local music forward. I’m also massively involved in Lindisfarne Festival and we are introducing a Hip Hop section to this years event there as well.”

Whilst there have been a lot of local acts announced for many of the new festivals announced in the North East, The Bridge has gone above and beyond to showcase Hip Hop talent from Tyne & Wear. Sandy explains the reasons for this, “Well my day job is a youth worker, music facilitator, and I spend a lot of my time writing, funding bids to help support people using music. Music is so powerful it really is life changing and over the years I’ve been disappointed theres never been much of a platform up here for young musicians, singers, rappers, producers compared with other cities around the UK. The Bridge is our opportunity to give the local acts a stage and really push them as best we can, the day also features a lot of workshops and masterclasses to help local heads up their game and this is just year one, the local side is something we want to develop year on year.”

One notable exception to the festival considering its North East Hip Hop edge, is a lack of Teesside representation. This is a recurring theme through North East Hip Hop events and one which many have picked up on. Leddie MC has posted on social media that she was approached but unavailable and Sandy has explained “We reached out to as many people as we could, like I say I want to grow this year on year and hopefully get more funding so we can contribute more towards costs. this Isn’t a one hit event, its just the start and we want to rep the whole of the North East.”

For anyone who feels they missed out on an opportunity this year, Sandy implores that he welcomes “any act getting in touch. Obviously the line up for this is locked but we are already looking at next years festival and hosting smaller events across the year between now and then. People can get in touch via The Bridge page or directly with me on Facebook, plus we are building a website that will be regularly updated and promote the best of the UK talent with focus on the North East.” 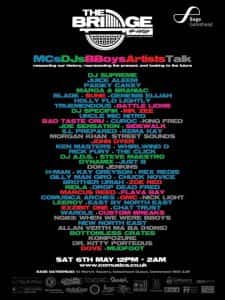